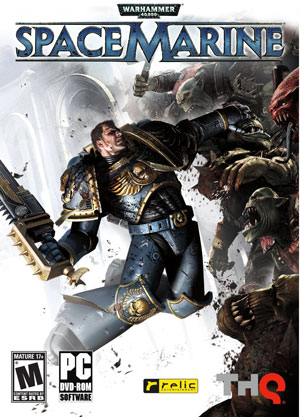 The newest video game in the Warhammer 40K universe is Space Marine, a 3rd person shooter. Well it’s more of a 3rd person combat game, I wouldn’t really call it a strict shooter. There is a LOT of melee in this game.

The premise is simple, you’re a Space Marine, and there are hordes of Orks to kill. There are also Chaos forces in the mix as well, but it looks like Orks are the primary baddies.

If you’re even mildly interested in these types of shoot-em-up games, I urge you to go ahead and download the free demo via Steam. But be warned, the game is highly violent and bloody, as indicated by its M 17+ rating.

In the demo, you get a taste for some of the weapons found in the game, and two of the melee weapons. There’s a Fury meter, which fills up as you destroy enemies, and certain melee attacks fill it up faster. Once the meter’s full, you can toggle Fury mode, which gives you a short burst of power and speed.

There are no health packs or healing stations. If your auto-recharging armor takes on too much damage, you start losing health. To replace lost health, you must execute stunned Orks. If your Fury meter is full and you toggle the mode, then you can execute Orks, even the Nobz (or whatever the larger metal-jawed Orks are called), without needing to stun them first.

The demo may even be enough for you since it offers some repeatability, especially if you set it to the highest difficulty setting, which can be a challenge. The full game features single and multi-player modes, and is available for PC, XBOX360 and PS3 at about $45-50.