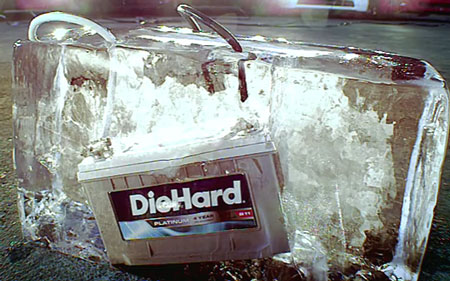 How does DieHard demonstrate the reliability and power of their batteries? With extreme torture tests! Watch as the guys at the torture lab put DieHard car batteries through unbelievable conditions. DieHard released a few videos thus far, but the following (our favorites) stand out as way more extreme than the rest.

DieHard Platinum Battery in a Block of Ice Starting 6 Cars

Craftsman tried a similar torture-test campaign a few months ago, and the results were very entertaining. Their lastest music video features the dings, bangs and roars of various tool isntruments and is pretty awesome!

It’ll be interesting to see how these guys take things up a notch. If they can – a DieHard battery vs. Gary Numan is pretty hardcore. Still… I wonder… how would a DieHard battery fare against a heavy rock band?