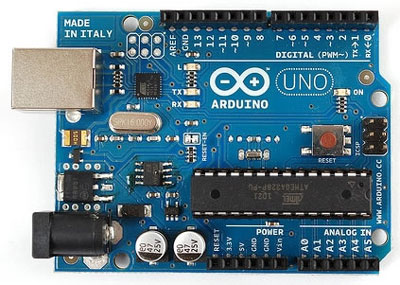 The Arduino microcontroller system, in its developers’ words, is an open-source electronics prototyping platform based on flexible, easy-to-use hardware and software. It’s intended for artists, designers, hobbyists, and anyone interested in creating interactive objects or environments.

At the minimum, an Arduino can be used to control lights, motors, and servos, and react to different conditions such as light, temperature, and touch, via sensor inputs.

There are many other popular microcontrollers on the market today, but Arduino’s low cost and open-source nature led to its widespread popularity and an enormous knowledge base.

I’ve always been into robotics, but I haven’t worked on a project in years and figured it’s about time to get back into things. One of my long-term goals is to create a quadrocopter, but in the meantime I have a few smaller projects in mind.

It’s actually incredibly easy to get started with Arduino, even if you’re a beginner with absolutely no electronics knowledge whatsoever. You can get started with just an Arduino board, but it will be better to purchase a starter kit or experimenter’s kit.

I ordered this experimentation kit from Adafruit, and it’s due to arrive in a few days. The kit includes the Arduino board itself, a small breadboard, jumper wires, a small component assortment, and a PDF guide to building a dozen or so circuits.

There are other starter kits available, but Adafruit’s experimentation kit is affordable and extremely beginner-friendly, requires no soldering, and includes everything one needs to get started and up to speed.

Beginners might also benefit from an Arduino book or two, but there is a wealth of free information online that covers most of what you will need to know. A beginners electronics book is also something to look into.

I would also recommend checking out Adafruit’s enormous tutorial database over at ladyada.net.